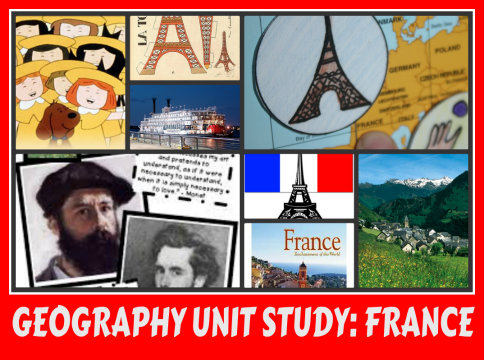 Geography and Country Facts
ALL ABOUT FRANCE

Here's a link for your own research from National Geographic.

Although ultimately a victor in World Wars I and II, France suffered extensive losses in its empire, wealth, manpower, and rank as a dominant nation-state. Nevertheless, France today is one of the most modern countries in the world and is a leader among European nations. Since 1958, it has constructed a presidential democracy resistant to the instabilities experienced in earlier parliamentary democracies. In recent years, its reconciliation and cooperation with Germany have proved central to the economic integration of Europe, including the introduction of a common exchange currency, the euro, in January 1999. At present, France is at the forefront of efforts to develop the EU's military capabilities to supplement progress toward an EU foreign policy.

Geography
France Location:
Western Europe, bordering the Bay of Biscay and English Channel, between Belgium and Spain, southeast of the UK; bordering the Mediterranean Sea, between Italy and Spain

Flag:  The French Flag Worksheet (from homeschool creations - check out their geography study) 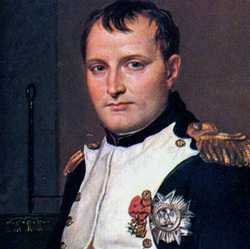 He was unquestionably brought some good to France after a decade of chaos and upheaval. He brought security, peace and even prosperity to France. For example, in 1804 the Napoleonic Code was introduced. It had a set of clear laws, applicable to all members of French Society. The Code was also introduced into other parts of Europe conquered by Napoleon, like Italy, Spain and some parts of Germany.

Open up this file and read about the changes Napoleon made in France after the Revolution. NAPOLEON CHANGES

More about Napoleon is here. 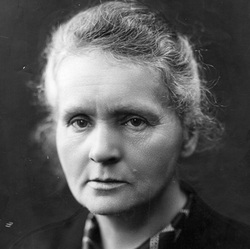 Born Maria Sklodowska on November 7, 1867, in Warsaw, Poland, Marie Curie became the first woman to win a Nobel Prize and the only woman to win the award in two different fields (physics and chemistry). Curie's efforts, with her husband, Pierre Curie, led to the discovery of polonium and radium and, after Pierre's death, the development of X-rays. She died on July 4, 1934.
*watch the biography and explain WHY she is considered a French Scientist even though she was born and raised in Poland

watch a short BIOGRAPHY on Marie. 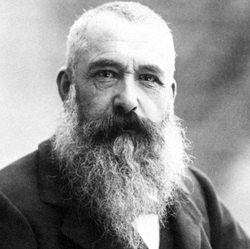 Claude Monet
Claude Monet was born on November 14, 1840, in Paris, France. He enrolled in the Academie Suisse. Impression, Sunrise was painted in 1872 and the group of emerging artists were named Impressionists after an article in a newspaper laughingly referenced the style of painting. 1874 was the year of the First Impressionists' Exhibition. The exhibition was held at a studio on the Boulevard des Capucines and also featured the work of other artists such as Edgar Degas, Pierre-Auguste Renoir, Alfred Sisley, Berthe Morisot, and Paul Cezanne.The style is referred to as "Impression," since it was more concerned with form and light than realism.

Watch a short biography on Monet
Read more about Monet if you wish...

below are images from Monet's collection of work. He focused on producing only his BEST work.
Go to the art lessons listed below and complete a work of art in the same impressionist style as Monet.
An EXCELLENT Resource with high quality images of his work from Artsy.net 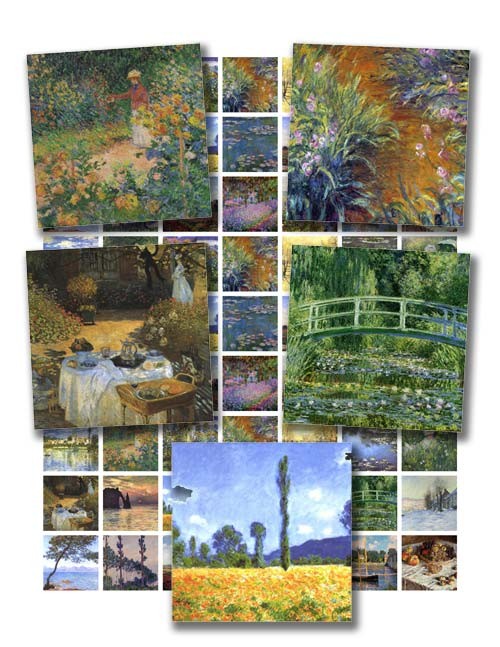 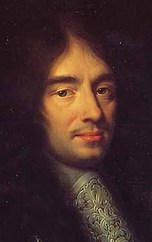 Charles Perrault
The folktale is a story, passed down verbally from generation to generation. Each storyteller told the stories a little differently, making them more interesting and fascinating as the ages passed. Different folktales bear the characteristics of the culture, folklore and customs of the people from which they originated.

Charles Perrault
Charles Perrault was a French writer who lived in the second half of XVII century. He was one of the first writers in European literature who turned his eyes to folklore.
Born in 1628 in a clerical bourgeois family, Perrault received legal education and had high royal office.
In the second half of XVII century there was a dispute amidst French writers about the advantage of modern writers compared to the writers of antiquity. Charles Perrault played an important role in this dispute, opposing to the genre and thematic limitations of classical literature.
In 1671 Charles Perrault was elected to the French Academy of Sciences.
In Folk Art Perrault found rich stories and images to create new artistic works. He turned to folklore by collecting a number of stories and published them in 1697 under the title "Tales of mother Goose". This collection included eight fairy tales, including "Little Red Riding Hood", "Puss in Boots", "Little Thumb" and "Cinderella." In subsequent editions Perrault added two more stories and a novelette.


Jean de La Fontaine
Jean de La Fontaine was a French poet and fabulist, who lived and worked during the XVII century. For special contributions to French literature was elected to the French Academy of Sciences in 1684. Published in 1668, the collection of fables brought La Fontaine international fame. The works of the ancient Greeks, Indian storytellers, other fabulists and folk tales about animals serve as a source of inspiration for the author. Drawing motives from these works, La Fontaine brings new life to the fable genre. Here's an example of his fables in verse. 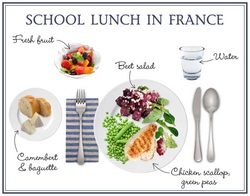 How is lunch in FRANCE different from your family lunch or school lunch period?

Starting when children enter school at age 3, school lunch consists of four courses: a vegetable starter (for example, grated carrot salad, or beet salad), a warm main course served with a side of grains or vegetables, cheese, and dessert. Why veggies first? Well, the French often do this at home for their first course; but they also know that hungry kids are more likely to eat the veggies if they are served first.

Fresh baguette, eaten plain, is also served. The kids drink water (there are no other drinks of any kind available at lunch, and there is a national ban on vending machines and junk food in all French schools). Dessert is usually fresh fruit, but a sweet treat is often served once a week.

There is only one choice on the menu, and food is served to children at the table until they are finished primary school (at 12 years old). This may be why the place where lunch is eaten is called a ‘restaurant scolaire‘ (school restaurant). High-school students typically get two choices for each course and often eat in a ‘self’ (meaning a self-serve cafeteria), although many French parents are ambivalent about this self-service model (preferring the idea of a restaurant).

CHECK OUT THIS FAMILY's study of France: Inspiring